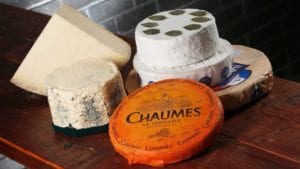 Well I definitely have go back to the Cheese Emporium.  Plenty of cheese and a friendly atmosphere to serve you.   It looks like people like Cheese all over the world.  I’m not really writing about cheese, I wanted to write about real estate and the ugly building that was recently constructed.  As far as buildings go, I think they should conform to the neighbourhood.  That’s why I love the old days and oldmusic etc.   It all works together.

Arguably, this building is not sexy, but it is however, a cash cow.   A commercial property in excellent condition with an A1 retail tenant and residential units above is a hot commodity, and worth its weight in gold, or cheese for that matter.   With over 20 years of experience in Real S. Taitt I have sold my fair share of commercial properties and have plenty of experience with cap rates and putting together a competitive commercial package for my clients.

August 18, 2015 — Toronto Real Estate Board President Mark McLean announced record home sales for the month of July. Greater Toronto Area REALTORS® reported 9,880 sales through TREB’s MLS® System, representing an eight per cent increase compared to July 2014. The number of transactions were up for all major home types, including a double-digit year-over-year increase in condominium apartment sales.

The MLS® Home Price Index (HPI) Composite Benchmark, which accounts for benchmark home prices in communities throughout the TREB market area, was up by 9.4 per cent yearover- year in July 2015. Over the same period, the average selling price was up by a slightly greater amount, growing by 10.6 per cent annually to $609,236.”As we move towards a new record for home sales this year, it is important to point out that home ownership demand has been driven not only by low borrowing costs, but also by the fact that the GTA economy has been performing quite well, with the unemployment rate lower compared to last year. Home buyers remain confident in the long-term benefits of owning a home,” said Mr. McLean.

Detached homes continued to lead the way in terms of price increases, with annual growth in the average selling price outstripping growth in the MLS® HPI detached benchmark. This suggests that there continued to be a greater share of high-end homes sold this year compared to last.

“With the level of inventory in the GTA trending below two months, many listings continued to generate a lot of interest from buyers. Not surprisingly, this supported further price increases well-above the rate of inflation. Assuming similar interest rate and economic environments over the next five months, strong price growth will remain the norm for the rest of 2015,” said Jason Mercer, TREB’s Director of Market Analysis